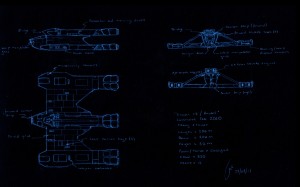 Cruiser 12 or “Anubis” is a 23rd Century deep space heavy battle cruiser. Over 200 metres in length, weighing 190,000 tons, with advanced weaponry and with a crew of 350 (including officers, space marines, and crew), it is one of the most powerful ships in the Earth fleet.

Construction of the ship was completed in February 2260. In March of that year “C12” was undergoing space trials when it suddenly had to divert to rescue Anna Solberg in her stricken Ranger 5 craft. Ranger 5 had fallen through time from the 21st Century while defending the Earth from Photaah alien attack. 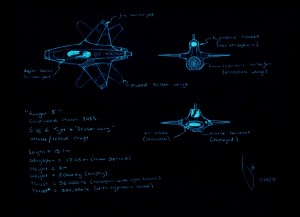 Piloted by Lt Anna Solberg, Ranger 5 is one of 6 Ranger craft designated to defend the Earth against threats from space, as well as assisting regular Earth defences with any ground / sea / air based threats. 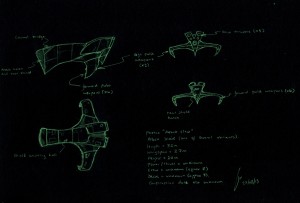 “Claw” type attack craft are designed, constructed and used by the Photaa. The Photaa are an aggressive alien race who have devious plans for planet Earth and the human race. Though essentially scout class vessels their weaponry is formidable making them a serious threat to Earth.

Not much is known about these mysterious craft but their weapons include powerful disruptive pulse weapons capable of ripping spacecraft and aircraft apart in a single shot.